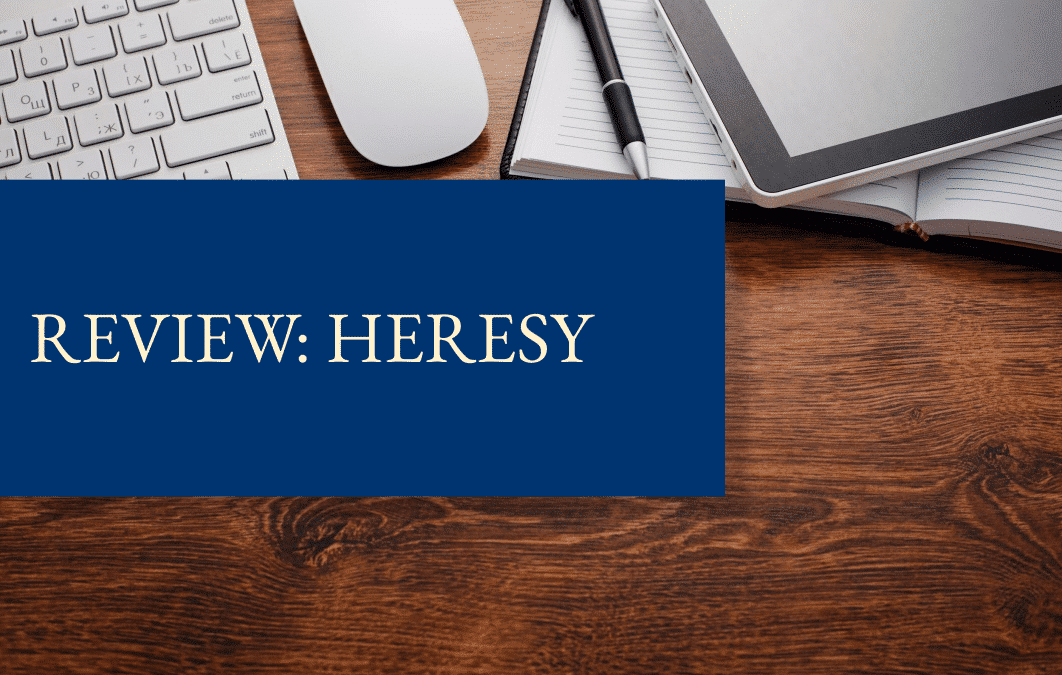 The History Quill Book Club is a book discovery service that advertises historical fiction books and related products to readers. This advertising consists of paid promotions and affiliate links, as well as our own products. As an Amazon Associate, we earn from qualifying purchases.

I’ve just finished Heresy by S. J. Parris, the first in her Giordano Bruno historical thriller series, and I enjoyed it so much that I decided a review is in order.

Set in 1583, Heresy introduces us to an England riven by religious strife. The English Reformation has forced Catholics underground, but threats to the Protestant Queen Elizabeth abound. Into this world steps our protagonist and philosopher-spy, Giordano Bruno, an outsider not only because he’s Italian, but also because his religious beliefs don’t fall neatly into either camp.

Recruited by the queen’s spymaster, Sir Francis Walsingham, to uncover a Catholic conspiracy at Oxford University, Bruno arrives there only to be confronted by a grisly murder – a murder that he suspects is linked to the conspiracy he’s been sent to investigate.

Heresy is driven by its gripping plot. We soon realise that, despite Oxford’s innocuous façade, a secret lurks in every dark corner. To solve the murder and uncover the conspiracy, Bruno is forced to untangle a web of lies, hidden motives, and secret allegiances. Like the reader, he never knows quite who to trust. One scene in particular, in which he finds himself trudging through Oxford’s dark streets to infiltrate a night-time gathering of Catholics, epitomises his precarious position. With the light from his lantern only extending a few feet around him, he hears footsteps following him and sees shapes in the shadows, but he’s unable to determine who’s there and what they might want. As in the rest of the story, his search for the truth brings him within touching distance of foes who are adept at remaining hidden, while Bruno finds himself much too exposed.

The characterisation, too, is excellent. Bruno makes for a strong protagonist, his nuanced religious beliefs and backstory as an escapee of the Inquisition giving him a natural sympathy even for those he’s been sent to root out. His attempts to protect those who wouldn’t necessarily do the same for him, together his conflicted feelings about his own mission, make him as sympathetic as he is compelling.

And then there’s the wider cast of characters, all harbouring their own secrets, all rich and flawed and absorbing in their own ways. Heresy is as much about deciphering their psyches and mysteries as it is about uncovering the conspiracy, the one being inseparable from the other.

With its textured characters and its many twists and turns, I thoroughly enjoyed Heresy, and I heartily recommend it to you. With five books in the series and a sixth on the way, I look forward to reading more of Giordano Bruno’s adventures.

You can buy Heresy on Amazon.

Andrew Noakes is the founder and executive editor of The History Quill. A graduate of Cambridge University, where he studied history, he spent nearly a decade working in the world of politics and international affairs before happily giving it up to pursue his real passion: historical fiction. He has previously lived and worked all over the world, including in the United States, Belgium, Cameroon, and Botswana.

Discover books in your favorite genres

Get free, curated book suggestions tailored to your genre preferences.

30 of the best historical fiction books

20 of the best historical romance novels

30 of the best historical mystery and thriller books