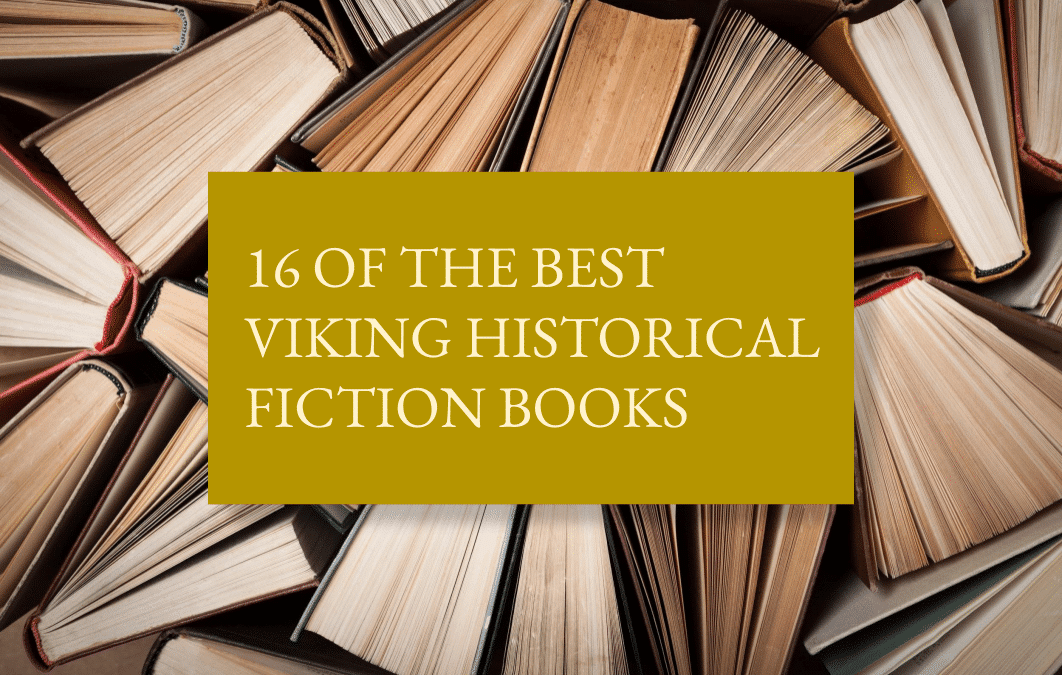 The History Quill Book Club is a book discovery service that advertises historical fiction books and related products to readers. This advertising consists of paid promotions and affiliate links, as well as our own products. As an Amazon Associate, we earn from qualifying purchases.

It can be tempting to stereotype Viking historical fiction as unrelentingly grim and macho – all battles and oaths to Thor, like the 1980s heavy metal music it had such an influence on. However, the genre is a very broad church. In common with the Old Norse sagas themselves, Viking novels are surprisingly diverse; they encompass everything from Nobel Prize-winning literature to graphic novels, and the best ones are full of good humour too.

Here we present 16 of the best Viking historical fiction books. This list is by no means definitive, but we hope it gives a good overview of how this most fascinating and exciting age and culture has been explored through the eyes of many talented writers over the years.

Any list of Viking novels should contain this book. The Long Ships is in many ways the book that started it all. Originally published in 1945, the tale of the interestingly quirky hero, Orm the Red, is still in print today. Set in the years up to and over the first millennium, the action spans the medieval world, from Sweden to the Caliphate of Andalucia and Scandinavian Russia. The novel reads like a 1950s Hollywood epic picture, its characters moving through some of the most famous historical events that involved the Norse, including the invasion of England by Thorkell the High, and the battles of Maldon and Clontarf.

The Norse sub-genre of historical fiction for some reason abounds with series of books, and Crowbone is part of one. Robert Low’s Oathsworn series follows the adventures of (in his own words) “a shipload of hard men owing no allegiance save to each other, bound by an oath made under the eye of Odin.” Crowbone is the fifth book in the series but can easily stand on its own. It weaves its way through historical events in the Norse world of the northern seas and follows (the historical) Olaf Tryggvason, aka “Crowbone”, in his quest for the crown of Norway.

3) Eaters of the Dead by Michael Crichton

Perhaps better known by its film adaptation, The 13th Warrior, Eaters of the Dead is the sort of fast-paced thriller you would expect from the pen of blockbuster novelist Michael Crichton. However, this is no mere genre thriller, and is in fact based both on a real historical figure and a classic of English literature. Ahmad ibn Fadlan was a 10th-century ambassador from the Caliph of Bagdad who left a memorable account of his meetings with the Varangian Norse on the Volga, including a famous eye-witness account of a Viking ship burial. It is both he and that event that kicks off the action of the novel, which then moves to the frozen north and a quest which retells the tale of the Anglo-Saxon poem Beowulf.

Giles Kristian has written epic historical fiction across several periods, from the English Civil War to Sub-Roman Britain. However, for most fans he is at his best when writing about Vikings. Blood Eye is the first in Kristian’s Raven saga, another of the Viking series which grace this list. It follows the adventures of a young outcast lad with no memory of his origins who is snatched by a band of Viking raiders led by the intrepid Sigurd “the Lucky”. Raven: Blood Eye has adventure, intrigue, and even romance – something that some may not expect to find in Viking lit.

5) The Sea Road by Margaret Elphinstone

The Sea Road is an epic tale that recounts the life and remarkable voyages of Gudrid Thorbjarnardóttir, a woman based on the historical Gudrid víðförla (“the far-traveled”). Elphinstone weaves the external action with the internal narrative of the strong, self-reliant, and compelling central character as she voyages across the northern seas from 11th-century Iceland to Greenland, and onward to the newly discovered lands even further west we now know as North America, as the world transitions from Heathenism to Christianity.

Odinn’s Child is the first in Tim Severin’s Viking trilogy. Like The Sea Road, the action starts in Greenland and provides a different view of many of the same characters. The tale is at times quite mystical, rather than packed with blood-and-guts action. As you would expect from a writer who also sailed across the Atlantic Ocean in a replica 6th-century skin boat, the scenes of voyaging across the freezing northern seas are particularly graphic. The series goes on to follow Thorgills (the hero) to England, and on to Byzantium to climax at the battle of Hastings.

No list of historical fiction would be complete without Bernard Cornwell making an appearance. The Last Kingdom was the surly and sarcastic Uhtred of Bebbenburgh’s (a Saxon raised amongst Danes) first appearance. The book is set in the days when Wessex stood alone against the seemingly invincible Viking hordes. The series goes on to chart the emergence of England (Aenglaland) as a nation, its warring kingdoms uniting against the common foe: the Danes. You always get the feeling that though Uhtred spends his days fighting for the English Kings and Christianity, he secretly longs for a mead bench in Valhalla with the Norsemen.

Dr Ramirez is perhaps better known as a TV art historian, but she is no stranger to the Anglo-Saxon and Norse worlds. Riddle of the Runes is the first in her series of Viking mysteries for children, aimed at 9-13 year olds. Set in a fictional Viking village, it follows a young girl, Alva, as she uncovers clues and seeks to unravel the mystery behind a murder. This is interesting in itself, as murder, morðor, or secret killing was a crime particularly reviled in Norse culture.

Giles Kristian returns to the list with another trilogy, this time recounting how Sigurd the Lucky from the Raven series rose to power. A brutal story of treachery and revenge set firmly in the heathen Norse world, God of Vengeance is a gripping tale of a young man who, when his family and clan are betrayed and killed by a king, embarks on an obsessive quest for revenge. Building his own war band through his cunning and innate leadership skills, Sigurd is determined to get his own back, even if the Gods themselves have abandoned him.

Swords of Good Men kicks off another series of Viking novels right in the middle of the violent clash that brought Christianity to Scandinavia. Ulfar is almost home after a long, dangerous voyage, and stops at a sleepy coastal town of Stenvik, unaware it is about to become the epicentre of a war. While concentrating the action in a small locality, Kristjansson introduces a veritable host of characters who ally or face off against each other in an atmosphere that reminded me of Cold War-era Berlin. Full of action and intrigue.

11) Northlanders: Sven the Returned by Brian Wood and Davide Gianfelice

Northlanders is a series of graphic novels that follow different characters across three time periods in the Norse world. Sven the Returned follows a Viking prince, Sven, living in exile as a member of the Byzantine Varangian Guard, who returns home to the Orkneys to reclaim his rightful inheritance. While including all the action expected in a comic, the story takes a wry look at what makes a “hero”, much in the way John Gardner did in his novel Grendel.

Today, King Harold “Hardrada” Sigurdson of Norway is largely a footnote of history, regarded as the one who came third in the battles of 1066. However, his incredible life story reads like a historical novel in itself, something which Justin Hill drew inspiration from to create a compelling novel. Viking Fire is the second of a series of novels set in the years leading to the Battle of Hastings, and achieved the accolade of Times Book of the Year. As much a Bildungsroman as a historical chronicle, Viking Fire gives us an account of Herald’s remarkable life in his own words, from his exile in the eastern lands of the Rus to his final march to the Battle of Stamford Bridge.

While set in the 14th century, so strictly speaking outside the historical Viking age, Greenlanders is still firmly set in the Norse world. It is set among the Scandinavian settlers of Christendom’s most far-flung outpost, a land of fjords, mountains, and rich hunting grounds. This tale varies from the perhaps expected Viking raids and bloody battles of this genre, as it is not that sort of novel. There are the Skraelings, the Inuit natives, but the real struggle here is with the elements and the encroaching climate change that will eventually bring an end to the Norse colony.

Wayward Heroes was first published in 1952 and won the Noble Prize for Literature. Inspired by the Medieval Fóstbrœðra saga, it tells the tale of Thormod and Thorgeir, Viking blood-oath brothers, who act much in the way most would expect of Vikings. However, the author’s portrayal of the characters’ actions highlights the importance of cultural setting in our perception. The actions that would have made Thormod and Thorgeir heroic and admirable to the medieval audience of an Icelandic Saga, when viewed through 20th-century eyes in the wake of the Second World War, are anything but. Wayward Heroes is no earnest sermon, however, and buckles as many swashes as The Long Ships or Viking Fire.

As the title suggests, this novel is a retelling of Macbeth. While Shakespeare updated the story to his own time, Dunnett takes the reader back to the 11th-century Norse-Scottish world of the historical Macbeth, who in this version begins life as Thorfinn. Born in Orkney, which lies between the ambitions of Norway and Alba, the book follows Thorfinn Macbeth as first he becomes Jarl, then goes on to unite the warring clans of Alba into a new nation under one king.

While Vallon, the knight at the centre of Hawk Quest, is not a Viking, his adventures take him from one end of the Norse world to the other. Vallon’s quest for an extremely rare bird of prey required as a ransom for a fellow knight held captive by Selijuk Turks takes him from England to Iceland, Greenland, and through Kievian Rus lands (Viking Russia) to Constantinople, the famous “Eastern Varangian Way” pioneered by the Vikings. On the way, he braves Viking Jarls, Normans, and the unforgiving elements in the company of a diverse band of characters, including Caitlin, a haughty Icelander. The novel is truly epic in scope, and very reminiscent of The Long Ships which began this list.

We hope you’ve enjoyed this list of 16 of the best Viking historical fiction books, compiled by historical fiction author, Tim Hodkinson. Tim’s latest novel set in the Viking age, The Raven Banner, is out now on Amazon. Happy reading!

Discover books in your favorite genres

Get free, curated book suggestions tailored to your genre preferences.

30 of the best historical fiction books

20 of the best historical romance novels

30 of the best historical mystery and thriller books